To learn about sex ed, vaping, and viruses, just log on to TikTok: the doctor is in 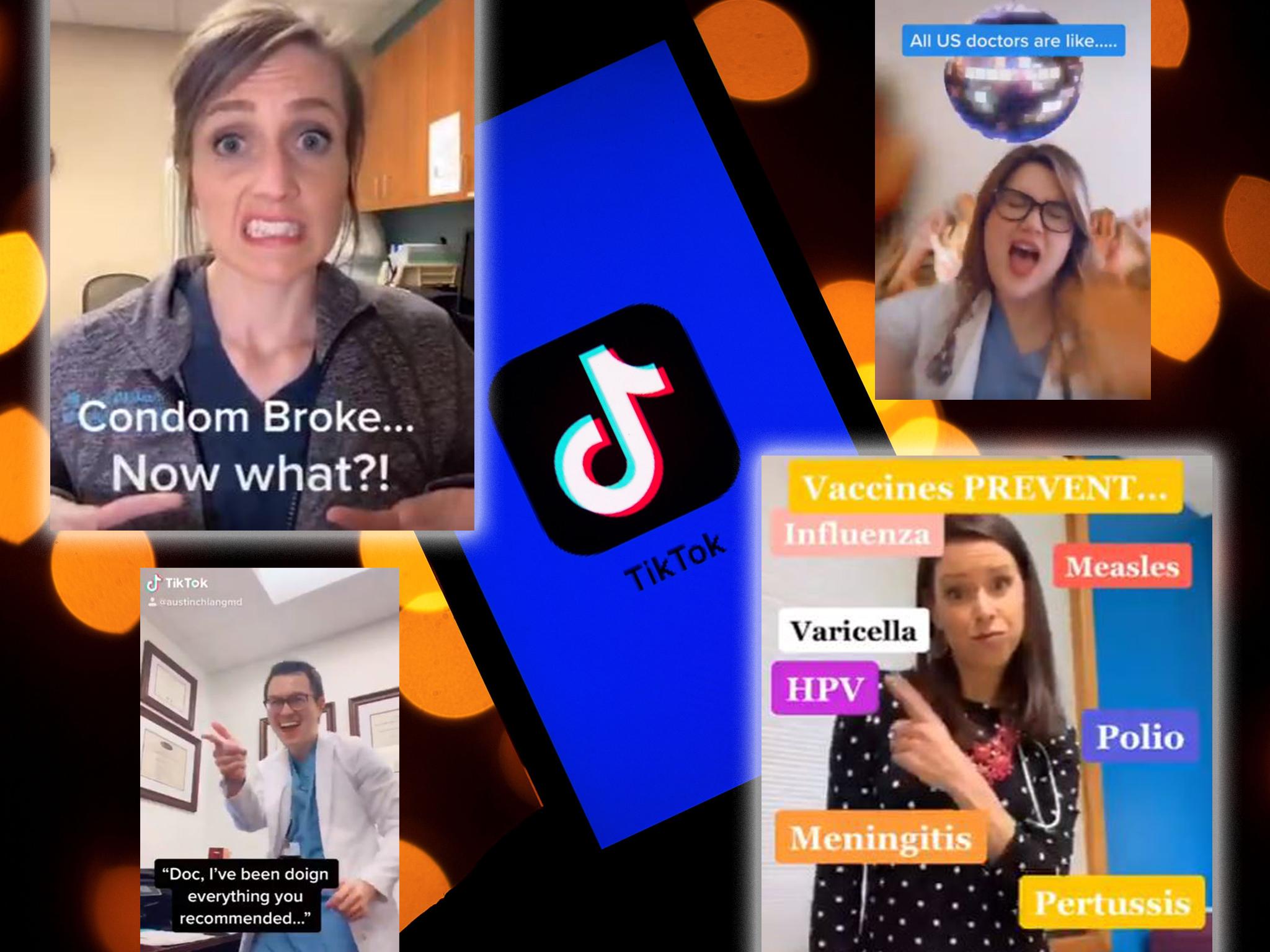 For decades, sex education in the classroom could be pretty cringeworthy. For some adolescents, it meant a pitch for abstinence; others watched their teachers put condoms on bananas and attempt sketches of fallopian tubes that looked more like modern art.

On TikTok, sex ed is being flipped on its head. Teenagers who load the app might find guidance set to the pulsing beat of “Sex Talk” by Megan Thee Stallion.

A doctor, sporting scrubs and grinning into her camera, instructs them on how to respond if a condom breaks during sex: the pill Plan B can be 95 per cent effective, the video explains.

The video is the work of Dr Danielle Jones, a gynaecologist in College Station, Texas, and so far has racked up over 11 million views. Comments range from effusive (“this slaps”) to eye-rolling (“thanks for the advice mom” and “ma’am, I’m 14 years old”).

“My TikTok presence is like if you had a friend who just happens to be an OB-GYN [obstetrician-gynaecologist],” Jones says. “It’s a good way to give information to people who need it and meet them where they are.”

Jones is one of many medical professionals working their way through the rapidly expanding territory of TikTok, the Chinese-owned short-form video app, to counter medical misinformation to a surging audience. The app has been downloaded 1.5 billion times as of November, according to SensorTower, with a mostly youthful audience; 40 per cent of its users are aged between 16 and 24.

Although medical professionals have long taken to social media to share healthy messages or promote their work, TikTok poses a new set of challenges, even for the internet-adept. Popular posts on the app tend to be short, musical and humorous, complicating the task of physicians hoping to share nuanced lessons on health issues like vaping, coronavirus, nutrition and things you shouldn’t dip in soy sauce. And some physicians who are using the platform to spread credible information have found themselves the targets of harassment.

“It has this incredible viewership potential that goes beyond just your own following,” she says.

Leslie’s TikToks on vaping-associated lung diseases drew over 3 million views, and posts on the flu and HPV vaccines also reached broad audiences beyond her hospital.

Striking a chord on TikTok, Leslie says, means tailoring medical messaging to the app’s often goofy form. In one post, she advised viewers to burn calories by practising a viral TikTok dance. She takes her cues from teen users, who often use the app to offer irreverent, even slapstick commentary on public health conversations. She notes one trend in which young TikTokers brainstormed creative ways to destroy your e-cigarette, like running it over with a car.

TikTok’s executives have welcomed the platform’s uses for medical professionals. “It’s been inspiring to see doctors and nurses take to TikTok in their scrubs to demystify the medical profession,” said Gregory Justice, TikTok’s head of content programming.

Jones, the gynaecologist, says she hopes the platform can help young people develop trust in medical practitioners and view them as more accessible. “Back in the old days, there was a town doctor and everyone knew where he lived, and you traded milk and eggs for healthcare,” Jones says. “You had trust in your doctor because you trusted them as a person first.” TikTok, she says, can help to humanise doctors – she’s seen that some of her own patients feel more comfortable with her because they have seen her playful social media posts.

But some doctors are also encountering responses to their videos that they did not expect.

Earlier this month, Dr Nicole Baldwin, a paediatrician in Cincinnati, Ohio, posted a TikTok listing the diseases that are preventable with vaccines and countering the notion that vaccines cause autism.

Her accounts on TikTok, Twitter, Facebook and Yelp were flooded with threatening comments, including one that labelled her “Public Enemy #1” and another that read, “Dead doctors don’t lie.”

A team of volunteers that is helping Baldwin monitor her social media has banned more than 5,200 users from her Facebook in recent weeks.

Baldwin says she started out feeling enthusiastic about the opportunity TikTok provides to educate adolescents, but her experience with harassment gave her some pause.

“There’s a fine line physicians are walking between trying to get a message out that will appeal to this younger generation without being inappropriate or unprofessional,” Baldwin says. “Because of the short content and musical aspect of TikTok, what adolescents are latching on to is not the professional persona we typically put out there.”

A spate of recent TikToks have further stirred questions about the potential for the app’s abuse. One recent TikTok post featured a medical professional speculating – as she lip-synced to the Rex Orange County lyric “how could I ignore you?” – that her patient’s chest pain could have been caused by cocaine. Another showed an emergency room doctor mocking patients who sought treatment in the ER rather than from a primary care physician – like going to A&E instead of a GP.

Sarah Mojarad, a lecturer who teaches a course on social media for scientists at the University of Southern California, says she has seen physicians either “bashing their patients” on the app or “whitecoat marketing”, a term that refers to the use of medical prestige to market inappropriate products like unauthorised supplements.

The youth of TikTok’s audience also raises the stakes when medical professionals misuse the platform.

“With a young audience, it’s really important to make sure that the content getting out is professional and accurate,” Mojarad says. “People may think some of it is medical humour, but it impacts care.”

TikTok’s community guidelines state that the platform does not permit “misinformation that may cause harm to an individual’s health, such as misleading information about medical treatments”. The company expanded its rules of conduct last month, as its user base has grown.

Some physicians worry that TikTok’s brief, playful clips can blur the line between general education and patient-specific medical advice.

Dr Austin Chiang, a gastroenterologist and chief medical social media officer at Jefferson Health in Philadelphia, says he has been asked about specific symptoms on TikTok and has to refer users to established medical sources or directly to their doctors.

Dr Christian Assad, a cardiologist in McAllen, Texas, says he sometimes scripts his TikToks, given the potential for confusion when he compresses a 60-minute talk on low-carbohydrate dieting into a 60-second musical clip.

Ignoring the platform isn’t an option, especially given the prevalence of disinformation on the app, Chiang says. Two of his more popular posts have countered the use of essential oils to cure diseases and exposed the failings of the celery juice fad diet.

“If we’re not there to be a voice for evidence-based medicine, who’s going to do that for us?” Chiang says. “Anti-vaxxers are already using social media to their advantage. By putting doctors on social media, we’re able to be a source of more accurate information.”

Still, for doctors turned influencers, the TikTok learning curve can be steep. Dr Matthew Schulman, a plastic surgeon in New York, says the slightly older users of Instagram and Snapchat have been vital to his private practice, helping to drive roughly 80 per cent of consultations. He often streams live from the operating room. “Buttock augmentation is really popular on social media,” he says.

But TikTok has presented him with cause for additional concern. The virality upside is massive: a post he made earlier this month discussing celebrity clients drew over 6.8 million views. But as he has watched his 10-year-old daughter use the app, he realised that he must exercise more caution in producing content.

“The demographic of TikTok is very young, and as a plastic surgeon I don’t feel comfortable marketing my services to children,” Schulman says. Simultaneously, he knows the app is growing fast. “I don’t want to be caught playing catch-up. In two or three years the platform could change, and if I already have an established account, I’m ahead of the game.”

In the meantime, he says, he relies on top-notch TikTok editors – his kids.

How Ecommerce Helps You In 2020

By the simplest explanation, ecommerce is electronic shopping through the internet. Also referred to as internet commerce. Any transaction or service done online, like money and data, can be named

Email the Key to Preventing Fraud?

Preventing fraud within your business can be simplified with the right tools, and at Tower Data, fraud prevention is one of the many reasons clients use our Email Activity Metric

Plenty of brands already know about the incredible advantages connected to YouTube Ads, including the fact that mobile ads receive viewer attention around 83% of the time, which is significant. They’ve been